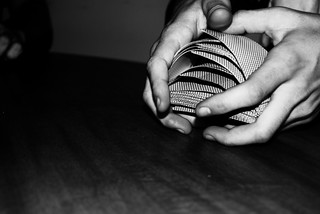 In 2010, entrepreneur Selim Zilkha purchased a complete set of silver playing cards from an anonymous family at Christie’s auction house in New York. The cards, which are gilded in gold, were made in Germany by a man named Michael Frömmer in 1616, and tracing their history tells a very interesting story.

The Tale of the Cards

The creation of the cards is interesting in and of itself, as the process used is now illegal. The process entailed grinding gold into a fine dust and mixing it with mercury (now known to be poisonous enough to kill), creating a paint-like substance used to gild intricate designs. The mercury was burned off in the kiln, while the gold bonded to the silver.

Oddly enough, the deck’s potentially deadly creation process is not the only thing that comprises its unique back-story. At the time of the cards’ creation, there was no standard by which playing cards had to adhere, and various regions of Europe played with their own styles. This particular set uses a style commonly seen in Italy, and it is the only complete set out of the five known surviving sets of silver cards. The cards were never intended to be played with, but rather displayed as works of art.

While it is not known who commissioned the creation of the cards or who owned them in the 17th century, a brass plate from the 19th century corroborates the story told by the anonymous family from Christie’s auction house. According to both the plate and family, the cards were in the possession of Infanta Carlota Joaquina, the daughter of a Spanish king and wife of a Portuguese prince, in 1807. The young woman fled the country, taking the set of silver cards with her, when Napoleon’s armies marched into Iberia in 1807.

Get Cash for Your Silver

How the cards eventually made their way into the hands of Selim Zilkha remains a mystery, but if you are in possession of any unwanted silver (cards or otherwise), you can sell your old silver to Cash for Silver USA. We will buy anything from silver spoons to old silver jewelry, so visit CashforSilverUSA.com to find out how you can trade your unwanted silver for cash today.