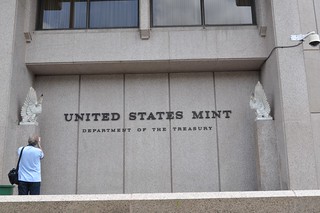 The Royal Canadian Mint has announced the release of the fifth of six commemorative silver bullion coins in the popular Canadian Wildlife series. This newest coin is dated 2013 and features an image of a Canadian pronghorn antelope in a field (designed by Emily S. Damstra) on one side and an image of Queen Elizabeth II on the other.

The Mint has released two coins of the series every year beginning with 2010. Each one is made from one ounce of 99.99% pure silver, has a face value of CAD $5, and has a maximum mintage of 1,000,000 per design. The previous four coins in the series featured a Canadian wolf, a Canadian grizzly, a Canadian cougar, and a Canadian moose. The animal to be struck on the sixth and final coin has yet to be announced, but it is set to be released in early 2013.

As bullion coins, the Royal Canadian Mint does not release them directly to the public. They are instead sold to a network of bullion dealers, and the price of the coins can vary daily with the current trading price of the silver they contain. While the coins are minted for investment purposes, their limited releases and special designs have made them popular among coin collectors.

A good sign for investors in the Canadian bullion coins, the price of silver in the United States rose 10% in September, out-performing all other precious metals for the month. This is following a strong showing for silver in the month of August as well, when its price went up 12.6%. This led to a 26% overall increase in purchases of American Silver Eagle bullion coins, registering August 2012 as the third highest selling month of the year and the second highest selling August in the 26 years since the release of the coin.

Silver’s performance for the fourth quarter of the fiscal year, July to September, is a positive one. The price is up $6.97, or 25.2%, from the third quarter, proving it to have out-performed all other precious metals in not only September and the quarter, but the year to date as well.

With the price of silver on the rise, now would be a great time to consider selling your unwanted or broken silver for cash. We cover the related shipping and insurance costs, and you reap the benefits. Check out CashForSilverUSA.com to find out how easy it is to turn your silver products into cash.