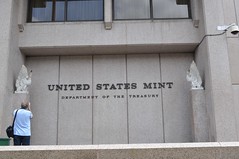 On November 5, the United States Mint released both the Denali National Park Quarter and the 2012-P Denali National and Preserve Park Five Ounce Silver Uncirculated Coin. The silver coins feature identical designs, but the former is entering into circulation as part of the America the Beautiful Quarters Program that began in 2010 while the latter is the last 2012-dated coin in the America the Beautiful Five Ounce Uncirculated Coin series.

The P in the coin’s name signifies that it was minted in Philadelphia, and the only difference in appearance between the uncirculated coin and the quarter is an inscription on the edge of the larger coin that reads “.999 FINE SILVER 5.0 OUNCE” to denote its precious metal content. The limited edition Denali silver uncirculated coin is three inches in diameter and has a maximum mintage of 25,000. Though it is part of a series, the Denali coin’s initial price of $229.95 is $25 higher than that of the 14 coins that were previously released. The prices of all of the other available coins in the series were also raised in response to current market conditions.

This newly released coin celebrates Denali National Park in Alaska, and the front features a portrait of former President George Washington along with the inscriptions from a standard US quarter in addition to the “P” mint mark of Philadelphia. The reverse side has an image of a Dall sheep in the foreground with mount McKinley in the background. Inscriptions around the side read “DENALI,” “ALASKA,” “2012,” and “E PLURBIS UNUM.”

While the coin’s face value is only 25 cents, it has a much higher melt value that is tied to the market price of silver. A third value of the coin is its numismatic value, which correlates to the price that a collector would be willing to pay for the coin and is dependent upon its rarity.

Trends in the Sales of Uncirculated Silver Coins

Sales of the coins in the America the Beautiful Five Ounce Uncirculated Coin series started out strong as all 27,000 of each of the 2010-dated coins sold out. However, the mintage of the coins was increased to 35,000 in 2011, and those editions are all still available for purchase. The Denali silver uncirculated coin is being held to a mintage of 25,000, and as demand for five-ounce silver coins has grown since October, hopefully all of them will sell. The Denali coin can be ordered either from the US Mint’s online store or by phone.

Whether you inherited a silver coin collection you are just not interested in or you have other unwanted or broken silver, visit CashForSilverUSA.com to find out how you can trade those items in for cash.